In a sentence: Where am I?

Flight from Milan to Vilnius, 2h 30m, I slept almost all flight. I started my journey the day before at 11.40 with a train from Pisa to Milan and a night bus from Milan to Bergamo airport. I passed all night inside the airport and some hours in my sleeping bag trying to sleep a bit. At 5am some guard wake me up, it isn’t more allowed to sleep in the floor. Check-in and security check and a long wait (again) to the flight.

Every time is wonderful to take an airplane, you start with a certain weather and landscape, and at the landing, you find yourself in a completely different landscape and weather. I think I was the only Italian in all airplane, everybody seems from the east-Europe and nobody speaks Italian. Strange.

In the flight, I woke up in a perfect time, when the descent started. Fortunately, because out of the window the first view of Lithuania was incredibly awesome. A lot of little villages with single houses covered by white candid snow. The snow was everywhere. I love the snow. I was so happy. 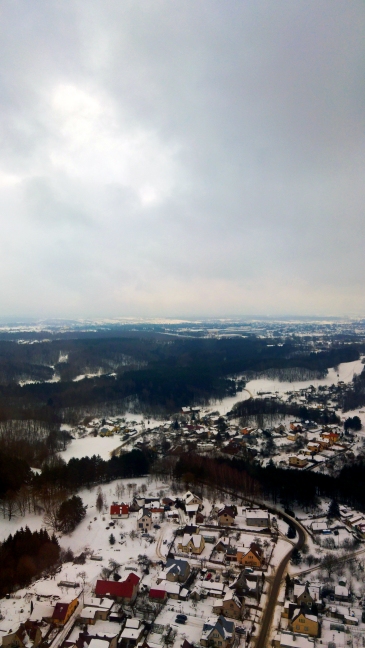 Vilnius is the capital of Lithuania and the airport is reeeeeaaally small. The smallest I ever saw, I didn’t expect that. I asked at the information center at the airport how to reach Kaunas, my destination to meet my receiving organization and to stay for the night, and she told me exactly how to reach it. The pity is that I misunderstood and I went to the wrong bus station waiting for a bus that will never show up there. I returned inside to ask again and I understood where it was, I ran to catch the bus and I saw from afar that it was just started, no problem I’ll stop in the middle of the street. Fortunately, the driver allowed me to get on the bus. Nice people live here, thank God. Anyway, not a very good start in this new country, I thought.

After a bus changed I reach Kaunas. The travel was quite interesting because it was the first impression, from the land, of this little country. The Soviet influence is huge. I’ve never been to Russia but from the media, I have an idea of the architecture etc., like everyone. And here seems a bit like there, I think. Around Vilnius, there are a lot of high red-white chimneys that erupt black smoke from the factories. And a lot of old Soviet buildings sprout up everywhere. I saw some new nice buildings and some modern skyscrapers but not too many. The streets are huge and there was traffic in Vilnius, after a bit the traffic disappear.

In the bus station of Kaunas, a nice lady from my receiving organization pick me up and brought me to my hostel. The hostel was nice and I met my first local. A drunk strange man who told me all story of his life with the bad conclusion of the wife’s death some months ago and the beginning of the alcoholism, meanwhile I was unpacking my backpacks. It was hard when he started showing me some old black and white pictures while he’s almost crying. I needed a shower.

After I decided to go wandering the city. I had all afternoon free and I was not interested in the tiredness of two days of travel and no proper sleep. So I saw a map of the city, I thought it wasn’t big at all and I started walking to the city center. Nothing very beauty and nothing very interesting, it’s Saturday afternoon but almost nobody is going around and the shops are closed or almost empty. After a pair of hours, I saw a bridge and I thought there was a river. I went there and on the other side of the bridge, on a little island, I saw the huge market I ever saw, like a mirage. It was full of happy people.

I really loved wandering the all market, and with very good smells all around I became hungry. I found a really inviting dish with strange things inside for three euro, fortunately, the merchant spoke English and tried to tell me what was inside. Some vegetables and a kind of ball with meat and potatoes. It was really good, and fat, perfect for the temperature.

I left my gloves in the hostel, and my hands were frozen. Grudgingly I returned to the hostel to take the gloves, I found the man in the same exact position how I had left him some hours early, with a bit of beer less in the bottle. Ok, I need to tell him something, but after. I returned outside, I cannot stay closed in the hostel when there is a city to explore. Anyway, I already visited all city center, so I went without a direction, where my feet brought me, for some hours. When I started to become tired I checked the route to return to my hostel.

The next day, after a proper night in a bed, the same lady of the day before gently brought me up to the bus station and we talked about some volunteering business. It was a pity that I didn’t find in the hostel the man I met to talk to him. But when I arrived at the bus station I sat on a bench and I found him in front of me, it was like a sign of destiny. I tried in my mind some beautiful words to say and I went to him. I told him a few words, obviously not the words that I tried. It wasn’t so good, but I will never forget his eyes meanwhile he said me “thank you” shaking my hand.

And now other 3 hours in an old bus to reach my final destination on the third day of traveling. The bus to Zarasai was going to start…

One thought on “Lithuania: first impression”